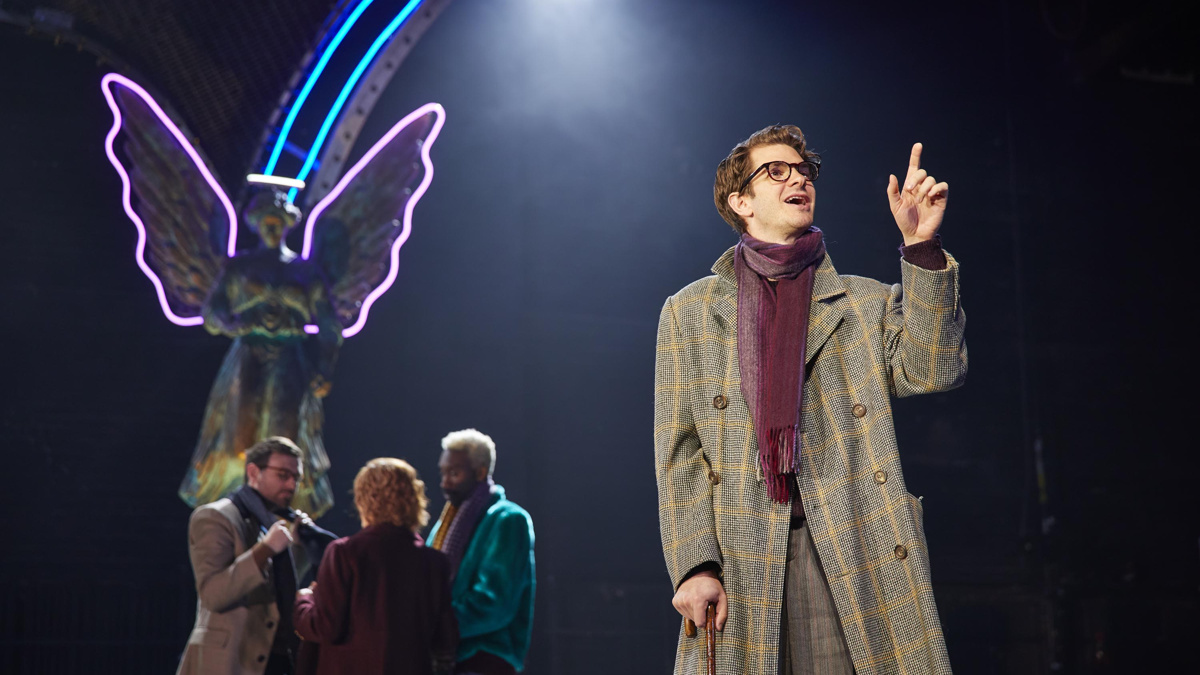 Angels in America Now Available from National Theatre at Home
The Tony and Olivier-winning revival of Tony Kushner’s two-part epic Angels in America, directed by Marianne Elliott, is now available from National Theatre at Home. The cast includes Tony winners Andrew Garfield and Nathan Lane as well as Olivier winner Denise Gough. Also launching on the streaming platform are Polly Findlay’s 2012 thrilling contemporary staging of Antigone as well as National Theatre Director Rufus Norris’ 2014 production of Behind the Beautiful Forevers. Head here to learn how to watch.

Watch Daveed Diggs Spit Rhymes in This Super Bowl Commercial
The man is nonstop! Hamilton Tony winner Daveed Diggs, who is also nominated for SAG and NAACP Image Awards for his performance in theDisney+ film of the  musical, appeared on small screens on Super Bowl Sunday. He rapped about “The Neighborhood” alongside Sesame Street’s Big Bird in a fun commercial for DoorDash. Watch him serve up sweet rhymes below.

Ma Rainey’s Black Bottom & More Earn Critics Choice Award Noms
The 2021 Critics’ Choice Award film nominations are in, and many theater stars have been recognized for their work. Netflix’s adaptation of August Wilson’s Ma Rainey’s Black Bottom garnered eight nominations, including for the late Chadwick Boseman and two-time Tony winner Viola Davis’ performances. Amazon’s One Night in Miami received six noms, including Tony winner Leslie Odom Jr. for Best Supporting Actor and for his song “Speak Now.” Other Tony winners recognized include Frances McDormand, Glenn Close, Ellen Burstyn and Ruben Santiago-Hudson, who adapted the screenplay for Ma Rainey’s Black Bottom. As previously reported, the winners will be revealed live on March 7 on The CW. Stage and screen star Taye Diggs will host the event, which will have its format announced at a later date as coronavirus health and safety guidelines are taken into consideration.

Acclaimed Wig Designer Paul Huntley Announces Retirement at 87
Paul Huntley, who earned a 2003 Tony Honor For Excellence In Theatre for his wig designs, has announced his retirement at the age of 87. According to The New York Times, his decision was the result of a recent fall that fractured his pelvis combined with the Broadway shutdown. Huntley has designed wigs and styled hair for more than 200 Broadway productions over the course of his career, which began with Mike Nichols’s 1973 revival of Uncle Vanya and concluded with Diana, which was filmed for Netflix. He designed wigs for stars like Elizabeth Taylor in Cleopatra, Faye Dunaway in Network and many more.

Dear Evan Hansen Announces Scholarship Contest
Dear Evan Hansen, along with partners the Broadway Education Alliance and Gotham Writers Workshop, has announced the third annual “You Will Be Found” College Essay Writing Challenge, inspired by the Tony-winning musical. The initiative builds on a contest previously exclusive to the New York City area and now extends to high school juniors and seniors nationwide with one scholarship of $10,000 awarded to the college of the recipient’s choice. Click here for the essay prompt and details, and be sure to submit by April 5.